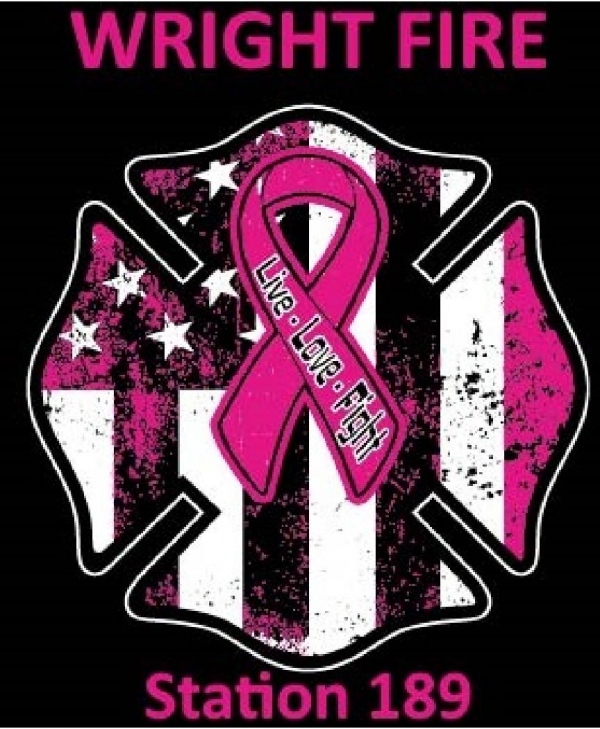 With hundreds of pages of information available -  we will be highlighting, passing on and posting information focusing on Firefighter Cancer Facts - and how it is impacting departments volunteer and paid.

We want to live long, healthy lives
after we retire

We all believe that our bunker gear is keeping out the big “C” word (cancer). What if I told you that the same bunker gear you’re wearing contains chemicals that are linked to cancer? How bad do you want to go out and put your gear on now? The National Fire Protection Association (NFPA) has minimum requirements for what your bunker gear should do. NFPA 1971, Standard on Protective Ensembles for Structural Fire Fighting and Proximity Fire Fighting, states that your gear must have an outer shell, thermal liner, and moisture barrier. It also states you must have a means of securing the liner to the shell that must be inherently flame resistant, coats are required to have wristlets, a drag rescue device (DRD) must be accessible from the exterior with a gloved hand, and you much have a Thermal Protective Performance (TPP) minimum of 35 and a Total Heat Loss (THL) minimum of 205. However, it does not go into detail on what your bunker gear should be made of. That part is up to the manufacturers.

Let’s begin with the basics. The NFPA requires your gear to have a TPP minimum of 35, maximum of 50. The NFPA also requires your bunker gear to have a THL minimum of 205, no maximum. Your TPP is going to protect you from the outside heat, where the THL is going to protect you from your own inside heat. TPP (divided in half) measures the time a firefighter has to escape from flashover conditions. For example, if you have a TPP of 50, you would theoretically have 25 seconds to escape flashover conditions. THL measures the ability of the garment to let heat escape. You cannot max out both numbers. The best way to configure your bunker gear is to have a happy medium of both.

Dr. Graham Peaslee, professor of physics at the University of Notre Dame, has tested various types of bunker gear. His research is highlighting the amount of Polyfluoroalkyl Substances (PFAS) in our turnout gear. Two common types of PFAS that you may have heard of include Perfluorohexane Sulfonic Acid (PFHxS) and Perfluorooctane Sulfonate (PFOS) found in Aqueous Film Forming Foams (AFFF). PFAS is a class of man-made chemicals found in flame-resistant and water-resistant items, including AFFF and turnout gear. Conveniently enough, your bunker gear is flame resistant and water resistant. When PFAS chemicals break down, some of them can create PFOA and PFOS. These particular PFAS have been linked to thyroid disease, hypertension, immunosuppression, kidney cancer, and testicular cancer (2020, ATSDR). PFAS as a class are known as the “forever chemicals.” Once they get into the environment, they build up and never leave. They can also accumulate in your body, and although they will eventually leave, it will typically take months to years to do so. It’s so bad that, in fact, the Environmental Protection Agency (EPA) has a lifetime health advisory on the levels of PFOA and PFOS in our drinking water. European firefighters have known about the issue of PFOA in bunker gear and have set a 0.1 microgram/dm2 limit on textiles in general. By July 2020, Europeans will have phased PFAS-containing foam out completely. The U.S. military is required to replace this foam from their trucks by 2022 and treats it as a hazardous material (2018, Station Pride).

In May 2017, the International Association of Fire Fighters (IAFF) released a statement claiming that there was no need to be concerned about PFOA in bunker gear because it had been phased out of bunker gear manufacturing since 2013 (2017, IAFF). No studies were released along with the IAFF’s statement. However, Dr. Peaslee’s findings were released in February 2018. Many “experts” and bunker gear manufacturers have refuted the claims and even called them false claims, saying that there has been no use of PFOA in turnout gear. There are some sources that say it’s the fireground, not the turnout gear. Despite the many articles saying there are no toxic chemicals on our bunker gear, there are no facts or research supporting those claims. The only published proof is Dr. Peaslee’s work, showing the presence of these chemicals on bunker gear. Diane Cotter, wife of a former Massachusetts firefighter, had spearheaded the campaign for more research and testing of our bunker gear. Push for more research came after her husband was diagnosed with prostate cancer. Today her husband lives cancer free, but Mrs. Cotter presses on for the testing of PFOA in bunker gear.

Many attempts at reaching out to manufacturers themselves have not proved to be fruitful. No bunker gear manufacturing company wants to release the chemical composition of its bunker gear. Bunker gear manufacturers aware of the harmful PFOA claim they have switched to newer “safer” chemical compounds; however, the newer/safer compounds are still a form of PFAS. Some of these chemicals come from other PFAS in the gear that turn into PFOA with exposure and wear. Still others release certain PFAS for which the toxicity in humans is unknown.

I could go on about the risk of PFAS in our bunker gear and class B foams. Diane Cotter and Dr. Peaslee have done extensive research and are continuing to push nationally for the research and funding required to test bunker gear. As firefighters, we are required to take measures to protect ourselves from cancer. New cancer legislation requires current firefighters to be nonsmokers. Fire academies are requiring new students to be tobacco-free for one to two years prior to enrollment in fire school. We, as firefighters, understand the risks we are taking when we sign up for the job. We are taking measures to prevent cancer because we want to live long, healthy lives after we retire. Shouldn’t we require the manufacturers to provide us with a list of chemicals that goes into the manufacturing of our bunker gear? This way, we can make a smarter, more informed decision about what gear we are choosing. We don’t need bunker gear that withstands hotter temperatures; we need smarter firefighters! Humans haven’t evolved to the point of survival that if they are trapped in a fire, we will be able to save them by having bunker gear that withstands hotter temperatures.

January 21, 2020 (Agency For Toxic Substances and Disease Registry) Per- and Polyfluoroalkyl Substances (PFAS) and Your Health
https://station-pride.com/2018/02/18/fire-gear-laboratory-test-results/

Larissa Conroy is a firefighter/paramedic for the Orlando (FL) Fire Department. She has an A.S. degree in emergency medical services; Fire Officer 1 certification; and several specialty certificates including Hazmat Technician, VMR Technician, Confined Space Technician, and many others.

All information below may be found at this link https://firefightercancersupport.org/     -  © 2020 FIREFIGHTER CANCER SUPPORT NETWORK

The International Association of Fire Fighters online cancer awareness and prevention course, created in cooperation with FCSN, launched in May 2016.

FCSN instructors deliver our award-winning cancer-prevention training every day. Our popular train-the-trainer program gives instructors the cancer-fighting tools and curriculum they can take back to their departments. We now have FCSN-trained instructors in nearly every state, across Canada, and all the way to Ireland and Australia. FCSN also provides training at some of the largest fire-service events, including the Fire Department Instructors Conference, at the National Fire Academy, and at a number of state fire training academies.

We also provide training for fire departments large and small. In 2015, FCSN collaborated with Boston Fire Commissioner Joseph Finn and leaders of IAFF Local 718 to bring our cancer-prevention training to Boston. Cancer caused 67 percent of the Boston Fire Department’s line-of-duty deaths between 2002-2014.

“Boston firefighters develop cancer at a rate two-and-a-half times higher than other Boston residents,” Finn said. “We have recognized cancer’s effect on our firefighters, and FCSN’s department-wide prevention training is an important part of our ongoing, comprehensive safety, health, and wellness program.”

IAFF Local 718 President Richard Paris agreed. “Since 1990, the Boston Fire Department has lost 190 members to cancer,” Paris said. “It’s a staggering number. We know that cancer is killing our members, and we’re making a collaborative effort to save the lives of Boston firefighters. FCSN’s training focuses on preventive measures the department and firefighters can take to reduce exposure to carcinogens and help avoid contracting this deadly disease.”

FCSN President Bryan Frieders, a deputy chief with the Pasadena (CA) Fire Department, praised Boston’s collaborative, aggressive approach to reducing firefighters’ occupational cancer risk. “Addressing the occupational cancer epidemic requires a cultural change for the fire service,” Frieders said. “Joe Finn and Richie Paris are leading from the front. Their work together with FCSN illustrates how effective labor-management relationships can be to enhance the safety and well-being of firefighters.”

Cancer is the most dangerous threat to firefighter health and safety today.

Are firefighters’ risks for certain types of cancer significantly higher?

Firefighters’ risks are significantly higher for some specific types of cancer than the general population.

Here’s an overview with some specific additional risks for firefighters noted:

What about cancer statistics for volunteer firefighters?

There’s little data about cancer among volunteer firefighters, but firefighting increases cancer risks significantly for all firefighters. The Firemen’s Association of the State of New York (FASNY) and Northwell Health launched a research project in 2017 to examine cancer incidence and mortality among NY volunteers. We will be sharing details about that research as they develop.

What about cancer statistics for women and non-white firefighters?

There have been relatively few studies about cancer among women and non-white firefighters, in part due to their statistically smaller representation in the fire service. There’s a small but growing number of studies with women firefighters and the specific cancer risks they face. We will be sharing details about that research as it develops. Black men have the highest risk of prostate cancer overall, according to CDC data from 2013, the most recent year for which data has been reported. The International Association of Black Professional Firefighters provides periodic prostate cancer prevention tips to its members via an email newsletter.

What research supports the link between firefighting and cancer?

Research spanning decades, continents, and more than 80,000 firefighters validates the connection between firefighting and occupational cancer. Here is an overview of key studies.

Accurate data is crucial when quantifying occupational cancer’s toll on—and threat to—firefighters and their families. Recently, a number of well-intended journalists, legislators, manufacturers, and others have cited inaccurate firefighter cancer statistics, including the following erroneous examples:

The proliferation of inaccurate statistics concerns Robert D. Daniels, PhD, CHP. In 2010, Daniels led the largest cancer study of U.S. firefighters to date for the National Institute for Occupational Safety and Health (NIOSH). “Some sources cite our study as reporting a two-fold excess of cancer among firefighters, then go on to say that two-thirds of firefighters are diagnosed with cancer,” Daniels said. “Neither statement is correct.”

Note that some fire departments are addressing occupational-cancer rates that are higher than national averages. For example, FCSN instructors cite insurer statistics for Miami-Dade Fire Rescue: 32 percent (nearly one-third) of MDFR’s active members were diagnosed with cancer or receiving cancer treatment between 2008-2010.

Click on the button above to hear delayed live audio feed from Mt. Top Fire Freq. and Fire Ground Ops.

This site has been viewed 166,135 times.
Pictures
Apparatus
Maintained by the members and staff of Wright Township Volunteer Fire Department. Designated trademarks and brands are the property of their respective owners. Copyright © 2006-2022. YourFirstDue Inc. All Rights Reserved. Content on this web site is supplied by Wright Township Volunteer Fire Department. YourFirstDue Inc. cannot be held responsible or liable for any content, text, pictures, or any other media found on this web site.
Management login
Powered by